MadAveGroup has earned a 2018 Silver Telly Award in the category of Branded Content / General - Promotional.

Since 1979, The Telly Awards has recognized creativity and effectiveness in video content and production. The competition attracts more than 12,000 entries annually from all 50 states and five continents.

Our winning video (below) is a darker but humorous self-promotional piece that stresses the importance of providing a great customer experience at every touchpoint.

Let Your Human Side Show

Probably 20 years ago, I was at our town’s art museum watching a friend play music in one of the galleries. About half way through the set, my friend’s four-year-old son emerged from the crowd and walked up to him on the improvised stage.

What happened next has stuck with me all the years since.

My friend - interrupted while doing his job, in front of an audience - stopped what he was doing and gave his full, genuine attention to his young son.

No anger. No frustration. No hurriedly rushing the little boy back to his seat. Just pure love on display.

My friend knew what was important. And still does.

Contrast that warm memory with what we saw from Professor Robert Kelly and his wife after their children innocently walked in on their father’s live BBC interview in March of 2017. (Watch the video here.)

The embarrassment. The apologies. His attempts to blindly push away his daughter. The mother’s frantic floor crawling.

Sure, an episode like that might throw anyone off his game a bit, especially if being interviewed on live TV. But because of the way both parents reacted, they kinda’ came off as jerks. And, purely from a marketing standpoint, how may that have affected Kelly’s personal brand and likability?

Goofy, unpredictable stuff like that happens now and then. About the only way you can prepare for it is by reminding yourself to be a human being, to roll with it, and to always look for the humor in unexpected situations. You should have heard the heartfelt “awwww” coming from the crowd when my friend reacted the way he did to his little boy.

For both you personally and your company, letting your human side show and embracing life’s wackier moments is likely only to endear you to your audience.

RELATED POSTS: What Can You Learn from a Coal Miner's Daughter?
Are You Too Chicken to Stay True to Your Values?
Lighten Up! Customers Will Like You For It (BusinessVoice)

Where Can You Inject Your Brand Personality? 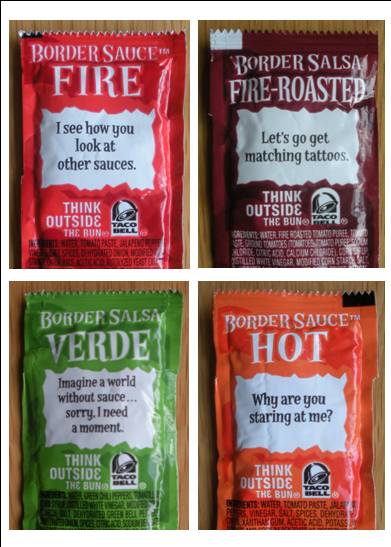 There may be dozens of opportunities to differentiate your company easily and inexpensively right under your nose. The first step is actively looking for places to inject more of your brand’s personality.

Here’s one example of how Taco Bell does it. They add humor to their sauce, or at least their sauce packets.

Take a look at the quirky copy inside the white space (at left). During a recent visit, my kids and I got a good laugh out of these - and nine or ten others. (We use a lot of sauce.) And all because someone at Taco Bell recognized the opportunity to personalize an everyday touchpoint and make more of it.

Other fast food restaurants have sauce packets, but I’ve never had a memorable experience with them, or shared a few laughs with my family because of them, or written a blog post about them. (Starting to see the added value you can create for your customers and your brand?)

What are some of the touchpoints you can re-think and then customize to elicit a more powerful response and support your brand personality? Product packaging? Invoices? Email signatures? Can your staff answer the phone in a unique way? Could your Facebook page be written from the perspective of one of the products you sell?

Sometimes, it’s the little things that people respond to, remember most vividly, and are more likely to share with others. So, get creative with the goal of helping your brand stand out.