Here's to Revolutionary Ideas - And All the Other Ones 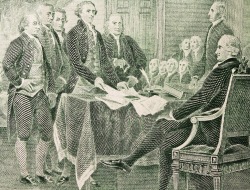 Today is July 4, 2016. More than 240 years ago, a bunch of guys had a pretty good idea: to formally break away from an oppressive ruler and form their own nation; a nation built on personal liberties and a government of the people.

It must have seemed that way to many people back then. After all, humans aren't equipped with 20/20 foresight, so who could blame the doubters, right?

But thank God for those crazy, impractical dreamers who, yes, risked their lives for their idea.

It could have gone down in flames as history's most poorly conceived experiment. It's certainly come close to collapsing a few times over its nearly two-and-a-half centuries.

But because of the tremendous pride, passion, fight and flexibility of the generations that descended from those founding fathers, the idea has survived.

Ideas that don't stand a chance...until they do.

Ideas that fail miserably, because they are the fertile soil in which the most fruitful ideas grow.

In your work, be a dreamer. Ask “what if...?” and “why not?” Imagine. Push for better. That group of people with the grand idea did, and you owe your entire way of life and work to their revolutionary thinking.

Now, it's your turn.

RELATED POSTS: Do You Have the Passion?
What the Gettysburg Address Teaches Us About Marketing