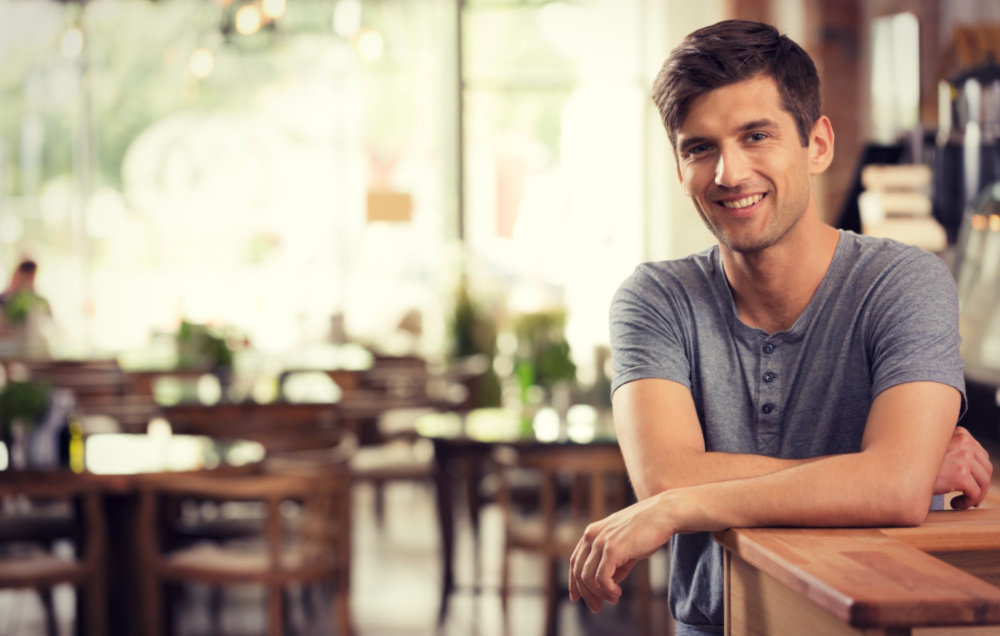 I ordered the bottomless salad.

“That comes with soup,” Mike the waiter reminded me. “Which kind would you like?”

But even though I was having only one course, Mike took it upon himself to make my lunch more convenient.

“I’ll bring you a large bowl of salad now, rather than smaller bowls one at a time.”

He also brought three cups of dressing right away, so I wouldn't need to ask for more later. Then, as I was finishing up, he asked if he could bring me an iced tea refill in a to-go cup.

Those may seem like small gestures, but I can’t recall a restaurant server offering them before.

Oh, and he was friendly and energetic, too.

Mike’s primary job was to take my order and bring food to the table, but within that limited scope of opportunity, he got creative. He anticipated my needs, applied some empathy, used the tools he had - salad, bowls and a disposable cup - and created a memorable encounter.

When I complimented him on his great work, Mike thanked me and told me he believes in the Golden Rule and the power of Karma. But I already knew that about him.

Now, try to tell yourself you can’t make the same type of effort for the people who keep your company in business.

Try to swallow the notion that extra effort and care don't matter, that they're not a defining difference between the brands people love and those that disappear. 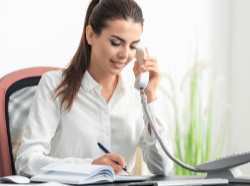 I received a testimonial yesterday.

That's not unusual. We're fortunate to receive hundreds each year.

But this testimonial was special.

It wasn’t from a client, partner, prospect or vendor. In fact, it wasn’t from someone we’ve ever worked with.

It was from a man who called us by mistake. That’s right: a wrong number.

But, it turns out, he had such a positive experience with the person who answered our phone that he was compelled to let me know about it. He wrote the following.

“I actually called by accident. Your number is one digit different from another company I was reaching out to. But, when I got off the line with Courtney, I went to your website and read the intro about the importance of making a positive impact during EVERY interaction. It very much hit home because I’d just had that experience with Courtney. It’s been three hours and I still feel the positive vibe she puts out. I want to commend your organization and her sincerely. Nice, genuine people seem to be in short supply these days.”

His email made me smile with gratitude.

As CEO of MadAveGroup, one of my primary responsibilities is to “protect our culture.” And nothing has a greater effect on that culture than the people we employ and our commitment to creating positive customer experiences.

Building that type of environment doesn't happen by accident. Ideally, it's organic and begins with an authentic desire to serve people, but it must always be encouraged and nurtured.

It can be grown, too. For instance, you can use ongoing training to teach employees how to actively create positive experiences for your customers.

Do you provide the tools or incentives to create great interactions? Do your team members know they have the power to make things right with angry customers on the spot? Do you talk about proactively looking for opportunities to wow your clients?

And most importantly, do you follow specific hiring procedures that improve the chances of your new recruits fitting into your positive experience culture?

How would your customers describe their experiences with your organization?

The success of your company depends on their answers.

The Benefits of Thanking Customers 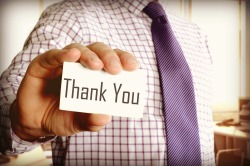 We’ve promoted the value of delivering a sincere ‘thank you’ to customers in this blog before (here, here and here, for example).

Now, an article at Time.com reveals why you should make a habit of writing and sending thank you cards to people.

“Saying thanks can improve somebody’s own happiness, and it can improve the well-being of another person as well - even more than we anticipate,” said Amit Kumar, the co-author of a study on the subject that was published in Psychological Science.

Over the years, we’ve suggested to a few of our clients that they send a thank you card to a customer each day - just one card; just one customer - and that they view it as part of their ongoing marketing efforts.

That methodical approach can produce as many as 365 unique, personal impressions each year; impressions that the card recipients will likely remember and maybe even share with others. Would that effect be worth just a couple of minutes of your time every day?

And now, we know that there’s an added benefit: you or the team member who writes and sends the cards gets to feel great about expressing gratitude, and that can help your employees derive more satisfaction from their work. (Imagine if EACH of your team members sent one thank you card per day!)

To make the thank you card writing process as easy and efficient as possible, consider these tips.

1) Purchase all your cards (or have them printed) in advance so you don’t have to search for new cards every few days. Buy the stamps up front, too. And keep all your supplies in one area so they’re easy to find.

2) If it helps, write five or six template messages based on different circumstances, and then use them in your cards. You might write a template for welcoming new customers, or a thank you for a positive review. Write an “I loved getting to meet you” note or a “thank you for buying a certain product” message. Then, personalize them as necessary.

3) Don’t put off a week’s worth of card writing ‘til Sunday night. Write and send one card every day to avoid becoming overwhelmed by the process, to provide a timely response to your interaction with the customer, and so you can put your best effort into each card.

Let us know if you need help writing your templates or designing and printing your thank you cards. And please tell us about the response you get, whether it’s from customers or the people you work with.

RELATED POSTS: Will You?
Better Relationships: They're in the Cards
Getting More by Giving More

I don’t eat fast food often, but one day my wife and I were in a hurry. She suggested we stop into Chick-fil-A. I’d never been there before, but I agreed to give it a try.

When we arrived, rain was pouring down. While we were working up the courage to sprint into the building, someone knocked on my wife's window. It was a young man from Chick-fil-A, and he was holding an umbrella. He escorted her into the restaurant and then came back for me. 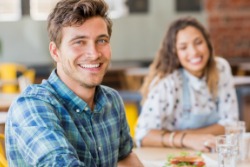 Once inside, we were welcomed with smiles and friendly greetings. Ordering our food was easy and convenient. And instead of waiting at the counter for it, we were invited to relax at a table, and told that our food would be brought to us.

During our meal, our host checked to see if we wanted anything. He cleared our table of the paper and containers we no longer needed. He refilled my drink - twice. He asked if we’d like dessert. And after we finished eating, he brought me coffee.

In just one visit, I was treated to eight pleasant surprises. I enjoyed a level of service I would have never expected from a fast food restaurant.

Chick-fil-A’s food was fine, but it was the overall experience that left me so satisfied. Both my wife and I left the host with a heartfelt “thank you” and “good-bye,” as well as sincere smiles.

Now, I find myself visiting Chick-fil-A more often, not primarily for the food, but because they make me feel so good.

So, what can you do to help your customers feel that same way? Surely, there are many points before, during and after your buying process that you can improve to wow your customers and generate loyalty and great word-of-mouth.

The process begins by caring enough to look for them.

The "Little Things" Make a Big Difference to Many Customers 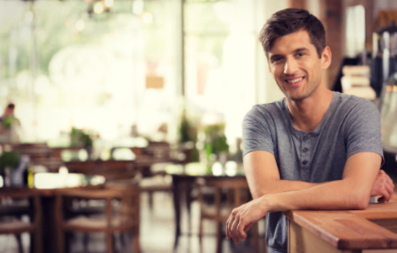 I’ll bet you’re great at something. Maybe a lot of things.

Even if one of those things is owning or managing a business, though, it’s likely that your strengths and interests aren’t broad enough to cover every customer touchpoint.

For instance, let’s say you run an auto repair facility. You and your team are wizards under the hood - mechanically and technically excellent. And, yes, that excellence is ultimately what your customers pay you for. But it may not be enough to attract and keep new customers.

If the exterior of your building could use a serious power wash, if navigating your parking lot is a nightmare, if the guys at your counter aren’t proactively helpful, if your website is cluttered, if your restrooms aren’t clean, plenty of people won’t even consider coming in or coming back.

It’s the rare person or team that can deliver a consistently great service AND nail all the expected extras. It can be even tougher to think outside yourself and recognize opportunities to delight customers. But going to that next level can mean the difference between merely doing business and providing an experience that customers return for and willingly promote for you.

Maybe you’ll never be the kind of person who thinks to spruce up the landscaping around your shop, or send a hand-written card to your new customers, or continually reinforce your employees’ telephone skills. That’s okay, as long as you partner with people who can evaluate the experience you provide, look for missed opportunities to connect with customers, and then put a plan or process into place that helps you move from being great at one thing to being great at a lot of things.

This recorded webinar is about delivering better caller experiences. Take a listen. 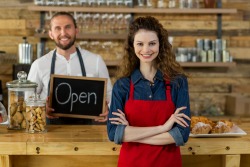 Will you create a memorable experience for your clients or customers today?

Will you listen a little more intently for unspoken needs or frustrations?

Will you offer an unexpected solution?

Will you push yourself a little bit harder to deliver an encounter they'll remember, come back again to enjoy, and even tell others about?

Will you find a way to add value and give more than is expected of you and your company? And will you do it willingly and cheerfully, recognizing the joy in that effort?

Not only is that how you earn loyal customers, it’s how - little by little - you make the world a better place.