How Are You Different?

have a friend who's owned a recording studio for about two years. A couple months back, we were discussing how he could bring more clients through the door. "Precious Gem Tuesdays," I shouted, forgetting that he'd actually have to buy a whole mess of rubies to give away.

We talked about marketing and eventually got on the topic of his unique selling proposition.

"There are three or four other studios in town that do the same type of work you do," I reminded him. "Aside from your clean bathroom, what reason does anyone have to choose yours?"

He stared at me, breathing through his open mouth.

As is so often the case with business owners, he was stumped when it came to defining what he does and the way it's different from how the guy down the street does it. So, I suggested surveying his existing clients.

I composed an email with 6 or 7 questions that were designed to solicit his client's true feelings about my pal and his studio. The response rate was great. And by analyzing the answers, we were able to find three very strong reasons why nearly every one of his clients keeps coming back.

The answers to "who are you" and "what do you do" - his unique selling proposition - became clear in the replies to that short email survey. And because the feedback came from a large sample of actual clients, we were able to trust that the written USP we developed could be trusted as accurate by his new and potential clients. 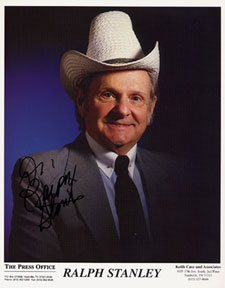 My wife and I saw Ralph Stanley in concert Friday night at The Ark in Ann Arbor, Michigan.

Ralph is a true original, and one of the last remaining members of the first generation of bluegrass musicians. You might know him best from his contributions to the soundtrack of "O Brother, Where Art Thou," but he's been singing, playing banjo and ridin' the road for 60 years.

You'd think he might have earned the right to retire by now, yet at age 79, he's still marketing himself. Before and after the show, he was seated at the CD table, signing his box sets and T-shirts and 8x10s.

About half way through his set, he announced from the stage, "It's commercial time," then tossed it to his guitar player who ran down the litany of merchandise we really ought to have to make our Ralph Stanley experience complete.

Ralph then made special mention of the two CDs on his own label, StanleyTone, pointing out that he gets to "keep all the profits" from those discs.

You gotta' hand it to anyone who finds a way to make a life and a living out of doing what they love, especially when what they do also brings so much joy to others. And you gotta' give it up for any marketer who makes "commercial time" so much fun.

Published in The MadAve Blog
Tagged under
Page 33 of 33