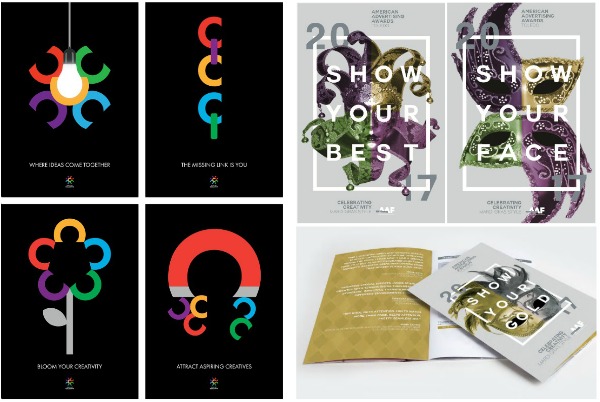 Our branding and design team, d2i, earned a Silver award at the 2017 ADDY Awards ceremony.

Designers Terry Lesniewicz and Greg Stawicki teamed up to create a winning poster series for The Mad Ave Collective (above left).

“The Collective’s logo inspired the posters,” said Stawicki. “We used elements from the logo to create strong, simple graphic messages that would engage viewers.”

“We took a contemporary minimalist approach with this project; very simple, very little copy,” said Lesniewicz. “It’s an attitude, and the response so far has been ‘WOW!’ especially from a lot of younger people who have responded to the work. It was fun to be the first agency in this area to adopt this style.”

Lesniewicz is a nationally known designer who’s been elevating brands for more than five decades. His work has been featured in magazines, award shows, even a museum, and has been seen by countless millions of people.

The d2i crew also designed the collateral for the ADDY Awards, including the call-for-entries poster, invitation and winners' booklet (above right).

BusinessVoice, our caller experience agency, received a Bronze ADDY for a humorous On Hold Marketing production they created for Arrowwood Lodge in Baxter, Minnesota.

BusinessVoice has won more awards for its work than any other OHM provider in the industry. The creative team specializes in developing Humor On Hold™. Listen to their winning entry in the video below.

More in this category: « Jerry Brown Inducted into Hall of Fame BusinessVoice Wins Best of Show and Best Branding Awards »
back to top