Do You Feel It? 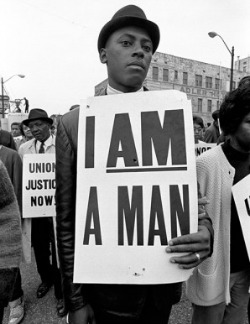 In my role as a blogger, I'm always looking for marketing and communication lessons to share. And I see an important point we can take away from the signs those striking workers carried.

Just four simple words. An obvious statement. Yet, it’s one of the most jarring sentences I’ve ever read.

In a documentary about the event, James Douglas, a strike participant, said the protests were about claiming “the same dignity and the same courtesy any other citizen of Memphis has.”

The thought that, still, in 1968 - during my lifetime - these American citizens needed to remind their fellow countrymen of their equality - and even their humanity - was and is deeply disturbing.

The person who wrote or chose the phrase “I AM A MAN” as a rallying cry understood - and knew in his bones - what those words meant. As he, too, was likely denied the basic rights of manhood in his own society, he most certainly felt the empowerment in that declaration.

I'm not equating the struggle for human rights with selling soap. I'm encouraging you to mean what you say - or write - about your work or your mission. Feel it first before you express it.

As you craft your own message, keep this simple, compelling phrase in your heart:

Then ask yourself: Do I believe what I've written? Would it change anything? Will it matter to people?

More in this category: « Will You? How To Earn Customer Trust »
back to top