BusinessVoice and our web agency teamed up to win two Silver ADDYs at the 2013 ADDY Awards ceremony. Presented by The Advertising Club of Toledo, the event was held February 28th at the Seagate Centre in downtown Toledo.

BusinessVoice was recognized for a humorous On Hold Marketing production it created for Binkelman Corporation of Toledo, Ohio.

Our web agency was awarded for its entry in the Mixed Media category. The elements included the website, Facebook page and radio campaign that the team created for Spirit Services of Columbus, Ohio.

Since 1994, the BusinessVoice team has been recognized more than 100 times with local, regional, national and international awards for creative and marketing excellence.

The Advertising Club of Toledo is an affiliate of the American Advertising Federation. It sponsors the annual ADDY Awards to encourage and acknowledge the creation of outstanding advertising by local agencies and marketers.

BusinessVoice and its in-house website design and marketing agency have teamed up to win four 2012 MarCom Awards for creative and marketing excellence. 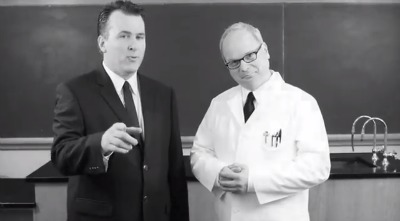 Winner of a Platinum MarCom Award, “Metric Metals & You,” is a tongue-in-cheek tribute to the educational films of the 1950s. The two-video campaign was produced for use on the Parker Steel website. BusinessVoice Creative Director Scott Greggory wrote, directed, oversaw the edit and performed in the videos. Nick Amrhein of 3by1 Media served as videographer and editor. Ed Hunter played the role of Professor Ed Beam.

The agencies won two Gold MarCom Awards for their work on behalf of Spirit Services. In another nod to days gone by, both the award-winning website and Facebook page feature a fun retro look and irreverent copy. Next Year’s News provided the website design. Scott Greggory wrote the copy and created the Facebook images. Chris Witeof provided additional content.

BusinessVoice's web agency also earned an Honorable Mention Award for their creation of the Buckeye Telesystem website. The site was designed by Kristin Fisher with additional design work provided by Greg Stawicki. The copy was written by Jessica Miller.

The MarCom Awards is a creative competition for individuals and companies involved in the concept, writing and design of print, visual, audio and web materials and programs. The mission of the MarCom Awards is to honor excellence and recognize the creativity, hard work and generosity of marketing and communication professionals. More than 6,000 entries are received each year.

BusinessVoice has been recognized with more than 100 local, regional and national awards for creative and marketing excellence.

In-store video, also known as digital signage, is a versatile, eye-catching marketing and communications tool that uses visual and audio elements - plus motion - to attract consumer attention. At BusinessVoice, we call it LobbyVision.

See samples and learn more about the benefits LobbyVision here or call 866/473-9000.

Even with all the advanced tools and know-how at our disposal these days, successful marketing often comes down to simple human interaction. That's why treating your customers with the care they deserve is just as important today as it was a century ago.

Watch this quick Marketing Minute video for three basic truths, and then visit our TelArt Telephone Skills and Etiquette page for details on the TelArt CD training program.

Why Your Company Needs a Facebook Page - Marketing Minute

Facebook can be a very effective marketing tool, but, as with any other type of marketing, it requires a strong strategy and dedicated execution to maximize success.

Still on the fence? Then watch this Marketing Minute video.

If you'd like to talk over the possibility of using social media to engage and stay in front of your target audience, give us a call at 866/473-9000.

Has your company been slammed on Twitter or other social media outlets? It may sting at first, but there is a positive lesson you can take away from that raw feedback.

Watch this quick Marketing Minute video for tips on how you can react, and become a better company as a result.

By providing caller-focused content, you can create a helpful, informative, even entertaining experience for your customers on hold, and build customer share at the same time. Watch this quick Marketing Minute video for a few hints.

Learn more about our award-winning On Hold Messaging services or sample our fun Humor On Hold page.

Hotels. Spas. Grocery stores. Car dealerships. Rehabilitation centers. Clothing stores. They're all using the power of scent to leave powerful impressions of their brand in the minds of their customers.

If you're trying to stand out amid the visual clutter, or make a memorable mark on your on-site customers, take a look at this Marketing Minute video for a few impressive facts about Aroma Marketing. To learn more, give us a call at 866/473-9000.

"If you build it, they will come." That may work for baseball fields, but it's rarely the case for websites. To maximize the return on your online marketing efforts, your website needs regular attention, as well as a consistent effort to drive traffic to the site from outside sources.

For a quick overview, spend 74 seconds with this Marketing Minute video. And for more details, visit our Website Marketing page or call 866/473-9000.

Marketing With Your Voicemail - Marketing Minute

You can use an everyday tool like voicemail to deliver personal marketing messages.

Watch this Marketing Minute video for a few quick tips, plus an idea on how to provide added value to those who call you.

Published in Marketing Minutes
Tagged under
Read more...
Page 1 of 8